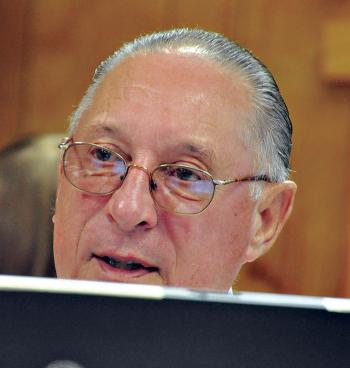 One Vermilion Parish School Board member is already worried about the 2014-15 budget, three months into the fiscal year. What makes School Board member Anthony Fontana worry even more is that the government is not going to approve funding to help pay for the second phase of rewiring eight schools.
The School Board recently completed the first phase of rewiring 10 out of the 18 schools for W-Fi. It cost the School Board $740,000. The School Board approved spending the money months ago and also hoped the federal government would pay 70 percent of the rewiring cost through the E-Rate Program (education grants for telecommunications). The School District was denied the money and had to pay the entire $740,000 cost because there was no federal dollars in the E-Rate Program.
Recently, Mike Dartez, the curriculum facilitator for the Vermilion Parish School District, approached the School Board asking for money to begin the second phase of rewiring the final eight schools for Wi-Fi. The total cost for that project is around $700,000. He wanted money for the engineering phase of the program.
Dartez informed the School Board that there is now money in the E-Rate Program.
According to School Board member Anthony Fontana, the School District is on target to finish in the red.
Fontana is cautious about approving another $700,000 for phase two because he is worried that the E-Rate Program will deny the School Board assistance like it did for the first phase.
“We (School Board) did not vote on the possibility, we voted on a probability,” said Fontana on the School Board not getting funding to help pay for the first phase of the Wi-Fi. “Almost guaranteed?”
Dartez said his E-Rate Program consultant said the School Board should get approved if they “Dot their eyes, and cross their Ts.”
“I have a problem,” said Fontana. “We talk about the budget. We talked about putting this (rewiring all the schools) in a phase program. Why aren’t we just doing a phase?”
For cost reasons, Fontana suggested rewiring schools in phases and not all at once.
Phil Sellers, the chief financial officer for the parish schools, explained to Fontana by doing the rewiring at once, it makes it easier to get E-Rate Program funding. He said the schools would lose the funding after two years.
“I voted on a $700,000 application last year because I was assured this was a really good thing that we were going to get (funding from E-Rate Program),” said Fontana. “That is part of our $2 million deficit. I am not comfortable.”
School Board Superintendent Jerome Puyau recommended the School District apply for the E-Rate Program Grant, because it could save the School Board 73 percent of the $700,000 cost for the wireless.
“It is a great opportunity to make our students successful,” Puyau said. “It will bring our technology up to where it needs to be.”
He recommended not dragging the installation of wireless over a two-year period because it pushes some schools behind in technology.
Fontana responded, “If we do not get the money ($700,000 from E-Rate Program) what are you going to cut?”
School Board member Charles Campbell said, “Since you started (rewiring), you may as well go all of the way.”
“I think we have to do it, at some point,” Fontana added. “My concern is....our insurance fund has not been very good. On top of that, we will be hit with a $240,000 tax on that fund. If it hits at the same time, we have to dip in our revenue; we have a serious problem the board is going to have to look at. We don’t know the other cost of our insurance premiums, and we are facing a deficit. If we say will do this, are we going to take away money from programs from somewhere else?”
Puyau said the School Board has “a one-time opportunity” to apply for the E-Rate Program Grant.
Fontana said he is worried that if the School Board does not get the $700,000 E-Rate Program Grant, it could begin a negative financial chain reaction.
“I don’t want to go back to what we went through in 1991,” Fontana said.
The School Board voted to pay the cost of the engineering fee.