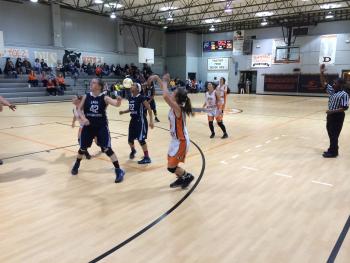 Kessler Dooley (40) of Delcambre goes for a shot against the Westminster Lady Crusaders. Dooley made two baskets for a total of 4 points Friday.

An aggressive first period wasn’t enough to keep the Lady Panthers of Delcambre over the Westminster Lady Crusaders on Friday night as they fell 59-49 in district action.

It was a valiant effort from the Lady Panthers squad, despite being down by double digits for most of the second half of the game. The gap was at its widest when the Lady Crusaders pulled ahead 52-36 deep into the fourth period.

The first period ended 10-8 in Delcambre’s favor. Four baskets into the second, the Lady Crusaders pulled ahead 14-12, but a foul allowed Delcambre to tie it up. It would be the last time the score would be tied the remainder of the game.

Westminster took a buzzer beater shot at the end of the half to go up by nine, 32-23. (DHS32) opened the half with a lay-up to narrow that score back to a 7-point difference. Westminster widened the gap again, as high as 16 points, and never looked back.

“We were off for two days,” head coach Lisa Richard said after the game. “The girls are used to coming in here and playing five or six times a week. We got tired and it showed.”

While it’s not been an ideal season, Richard remains positive about the team’s output. “They hustle,” she explained. “They don’t quit, and I’m proud of them for that.”

Emily Romero led the team in points scored, picking up 18. Nicole Bouillion had 12 on the night, as well.

As a team, the LAdy Panthers went 9-17 on free throws. They made 17 baskets inside the arch and none from the outside. Their next match as of press time was a make-up game from last Friday against David Thibodeaux.

It was a tough battle for the Delcambre Panthers, who were within a single basket at the end of the first period, but ultimately fell behind by as much as 35 points later in the game. Ultimately, they fell with a final score of 78-55.

“We consistently score around the 40-point range,” coach Johnny Trangmar said before heading to the back with his team. “If we can keep an opponent in that range, we’ve got a shot.”

The problem, he says, is a lack of steady shooting. “We practice shooting for 30 minutes every single day,” the head coach said. “When we get in a game, I dunno. We can’t seem to get the shots in.”

The Panthers took an early lead over the Crusaders with a quick basket, followed a minute later with a free throw to make it 3-0. Westminster was able to come back and take a 12-9 lead at the end of the first period. That was the closest they’d be for the rest of the game.

Alex Barras led the team in scoring, picking up 20 points in a basket, a 3-pointer and going 5-8 on free throws.

Behind him was Reese LeBlanc, sinking five baskets and making a free throw for a total of 11 points. Braxton Trahan was behind LeBlanc, picking up 10 points with a free throw and three 3-pointers.

As of press time, like the Lady Panthers, the Delcambre boys squad was set for a Saturday make-up game against David Thibodeaux as they continue to make their way through district play.