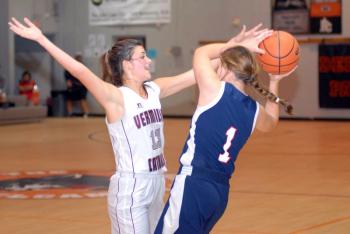 Kylie White of VC (left) guards a Notre Dame player tight during the tournament in Delcambre.

A freshman paced the Lady Eagles of VC in their 63-50 win over Delcambre in the Lynette Viator Memorial Tournament Friday in Delcambre.
Kelli Frith, the younger sister of former player Katie, scored 20 points to VC. She was 10 out of 13 from the charity stripe.
Bella Doucet scored 15 and Olivia Chiasson had 11 for VC. Emma LeBlanc made 6, while Ann Catherine Gallet added eight.
Delcambre was led by Karlie Crochet and Heidi Menier, who both had 11 points. Mai Pope added nine, while Tayah Lewis (8), and Cheyenne Dunn (7) also scored.

The Erath Lady Bobcats won their second game in a row behind the scoring of Monette Bolden, who scored a season high 29 points.
Erath beat Comeaux, 57-30, in the second day of the Lynette Viator Memorial Basketball Tournament on Thursday.
Bolden, who has scored 22-plus points three games in a row, had 7 points in the first quarter and nine in the second period for 16 first half points. Erath led 34-12 at half.
Teammate Alexis Lege added 19. Other Erath scorers were Reanne Walsh (2), Ann Marie Frederick (6) and Lexi Gisclair (1).

Northside scored 26 points in the fourth period to cruise to a 70-45 win over Erath in Delcambre on Friday.
Monette Bolden, for the third game in a row, scored 20 or more points. She had 21.
Alexis Lege added 16.