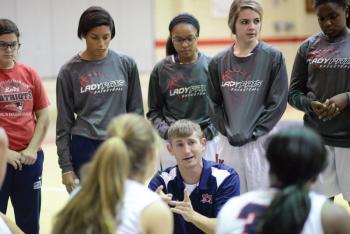 LEROY — After a rough 2013 season, North Vermilion girl’s basketball team has a new face of the program.
Casey Meador, a former basketball player at North Vermilion High School, is the new head coach of the girls’ team, and it seems that he has made an impact with his players quickly.
“His intensity level, and his care to make the team much better helps us,” said senior Simone Pillette. “He believes in us working together and knowing that whatever we do is based off of energy level. He actually says ‘intensity and mental toughness, that’s what our entire program is based off of.”
Meador’s philosophies showed glaringly during the North Vermilion tournament last week. The Lady Patriots played suffocating defense at times, and gave maximum effort for the majority of the games.
Pillette admitted that the team had to make an adjustment when Meador arrived, because they did not meet his demands right away.
“It was really hard at first,” she said with a smile. “It was hard because the physical ability we had was nothing compared to what he expected, but now we’re getting there.”
As a basketball player, Meador acknowledged one of the main differences between girls and boys basketball.
“The biggest difference is that girl’s basketball is not played through athleticism as much,” he said. “It’s based more on skills and fundamentals. Who can make the least mistakes is really the key.”
Going into the season, North Vermilion will be led by the three-headed attack of Morgan Harrington, Pillette and Lanie Breaux.
The trio played well in the tournament, and hope to carry that momentum into the regular season.
The Lady Patriots will be in action on the road tomorrow against Morgan City.