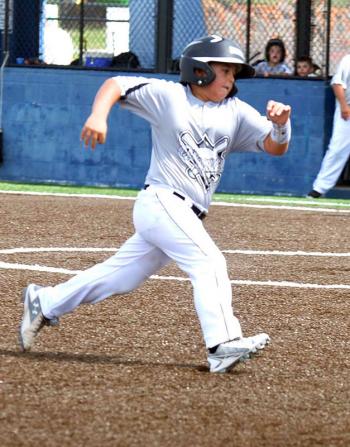 Remy Broussard hustles for third base for Kaplan.

YOUNGSVILLE - The Kaplan All-Stars needed an extra inning to beat Kinder, but then fell to Scott in the second game of the 7-8 year old Super Regional Pinto Tournament on Sunday in Loreauville.
Kaplan played the QSA National team Monday night in the loser’s bracket. The winner stays alive while the loser goes home.
The game was still in progress when the Meridional went to press on Monday.

The QSA Nationals tried to hang with one of the favorite teams to win the entire tournament.
Kaplan fell behind 12-8 after four innings against Scott.
With one out, Sabe David and Aiden Gaspard both singled. Remy Broussard had an RBI-double to make it 12-9.
In the top of the sixth frame, an open inning, QSA was only able to get one batter on base, (Landon Lemaire) but did not score any runs.

The Kaplan All-Stars needed two hours and 30 runs to win its opening game of the Pinto Regional Tournament Sunday.
The Kaplan All-Stars had an eight-run league going into the bottom of the sixth inning - an open inning.
Kinder somehow managed to score eight runs in its final at bat and tied it 22-22 to force another inning.
In the extra inning, Shawn Perrin got things started with a single. Lemaire singled and then Hayden Mire brought both of them home with a 2-RBI double to make it 24-22.
Reese Meaux followed with a two RBI-double of his own to make it 26-22.
Toby Gaspard and Remy Broussard each had hits in the inning to score more runs to make it 30-22.
Kinder scored three runs in its final at bat.
The game went back-and-forth and the lead changed hands multiple times.
Kaplan led 10-6 after two innings.
In the third inning, Eli Simon and Reese Meaux both hit in runs.
In the top of the fourth inning, Kinder scored four runs and went ahead 12-11.
Right back came Kaplan. Kevin Small smacked a 2-RBI double and Perrin hit a RBI-single to put Kaplan ahead 14-12.
Kaplan looked to blow the game open with two outs in the top of the sixth frame. Brant Schexnider hit a 3-RBI in the park home run that gave Kaplan a 19-14 lead.
Broussard put Kaplan up 20-14 with a 2-RBI double.
Kinder rallied and scored eight runs in the bottom of the sixth inning to tie it 22-22.