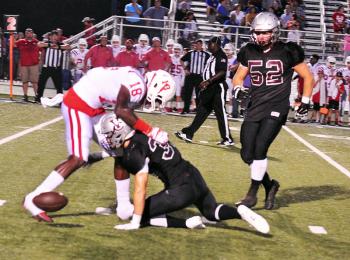 VC’s Matt Fontenot (31) makes a tackle and knocks the football out of the hands a Central Catholic receiver. In the background is Peyton Theriot (52).

LAFAYETTE - No longer are Tyler Derouen, William Noegel, Emile Trahan, Hunter Frith or Devren Constantine wearing Vermilion Catholic uniforms. They have all graduated.
So, Thursday night, was a chance for some new players to step up for the Eagles.
The Eagles played Central Catholic in the first-ever Iron Man Jamboree at Teurlings High School.
After two 12-minute halves, VC came up short, falling 20-13.
VC, known for its explosive offense, the last four years, did manage to move the football. The offense finished with just under 200 yards (196).
First-year VC head coach Ossie Blaize saw some good things and some bad things with his team.
“There were pluses and minuses,” said Blaize. “I saw some good things Our running game, we averaged four yards a carry. I am pleased with that.
Defensively, I thought we made some good plays but we did not play the ball very well in the air.”
Junior quarterback J. T. Lege, replacing Frith, who threw for more than 2,500 yards last year, got his first varsity start. Lege, who threw the prettiest spiral pass, completed 8 out of 18 passes for 161 yards and one touchdown. He also had two interceptions.
The breakout star of the jamboree was senior Gage Broussard. Broussard, who ran track last year with Emile, showed his speed as a receiver and a kick-off return specialist.
Broussard had four catches for 64 yards. He averaged 16 yards a catch.
As a return man, he had three returns for 75 yards.
Garrett Wiggins also had a 91 yard touchdown return in the first half.
When the Eagles did run the football, they gave Kalix Broussard the football. Kalix had eight carries for 35 yards.
The Eagles scored a touchdown at the 6:46 mark in the first half when Lege connected with Wiggins for a seven yard TD catch. Cade Boudreaux nailed the extra point for a 7-0 lead.
Central Catholic came right back and scored on its next possession and tied it 7-7.
Wiggins’ 91-yard return put VC back up 13-7. Central Catholic stormed back and tied it 13-13 at halftime.
Central Catholic finished with 10 first downs, 83 yards rushing and 129 passing.
VC players with catches: Alex LeBlanc (1-43), Matthew Fontenot (1-25), Nick Smalley (1-12) and Wiggins (1-7).