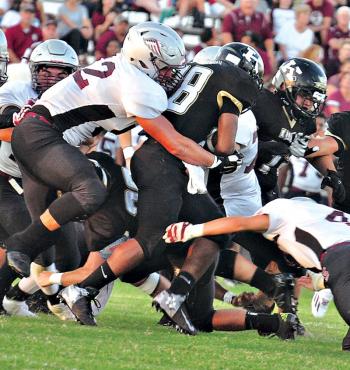 Vermilion Catholic senior linebacker Peyton Theriot and the Eagles have played against two good teams with an outstanding running game.
There was Class 2A Catholic High of New Iberia in the first game and the Wing-T offense of the Class 3A Kaplan Pirates this past Friday.
In both games, teams rushed for more than 300 yards against the Eagles’ defense.
There is no vacation this week for the Eagle defense on Friday at home.
The Eagles will be playing another team that has a great running game. The 1-1 Erath Bobcats come into the game with a potent running game behind a solid running back named Elijah Mitchell.
Mitchell comes into the game having rushed for 344 yards on 28 carries in two games. In his first game against Delcambre, he ran for 284 yards. However, last week, he was held to only 59 yards on 20 carries against Catholic High of New Iberia. He averaged only three yards a carry. It was the least amount of yards he has run since his sophomore year.
“Mitchell is good, so we have to execute the way we know how,” said Theriot, who has been starting since his sophomore year. “We felt against Kaplan, we did well for three quarters and then we slacked off at the end. If we play fully to our potential, then we can stop him (Mitchell).”
Catholic High created a defense especially designed to stop Mitchell and let the rest of the EHS team beat them. Theriot did not say if the Eagles will be using the same defense as Catholic High, but he did say the key to slowing down or stopping Mitchell is to not let him get into second gear.
“We are going to do our best and try not let him get going,” said Theriot. “Once he breaks off a few runs, he is probably not going to be stopped. As soon as we can stop him behind the line of scrimmage, we are all going to gang tackle him.”
After coming off its second loss in two weeks, Theriot said the team’s attitude is still positive because of who they have played.
VC’s two losses have been to a team ranked No. 10 in Class 2A (Catholic High) and a team ranked No. 6 in Class 3A.
“We know we are one of the best teams in Class A. The first three games we play have always been the hardest three games we will play. It is always good we play better teams”
Highland Baptist will be VC’s first Class A opponent and a district opener next Friday.
Game time Friday is at 7 p.m. and admission is $8 per person.