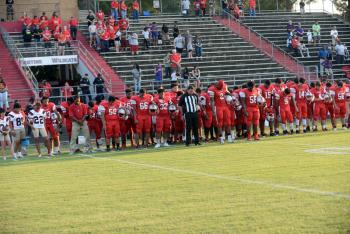 The Abbeville Wildcats gave the Cecilia Bulldogs all it could handle and then some in a district opener for both teams.
The Wildcats dropped a close one, 37-28, on Friday in Abbeville.
The Wildcats found themselves down 30-14 at the start of third period. Abbeville could have folded but it did not.
The AHS defense held and the AHS offense scored 14 straight points to close to within two points, 30-28, with 7:17 to play in the game.
Channing Spears had a 10-yard TD run and a 6-yard touchdown run for Abbeville. Quarterback Demarcus Collins had a two point conversion that made it, 30-28.
But the Bulldogs came right back and scored on their next possession. The Bulldogs scored from the 9 with 4:31 to play in the game.
Abbeville (1-5) had one of its best offensive games of the year. The Wildcats rushed for 206 yards and passed for 118 yards.
Spears had a career-night with 12 carries for 89 yards. He averaged 7 yards a carry.
Fullback Jalen Montgomery had 10 carries for 30 yards and a touchdown.
Collins had 14 totes for 35 yards.
Abbeville used a two-quarterback system. Sophomore Chad Celestine was four-for-six passing for 104 yards. Collins was three for five for 14 yards.