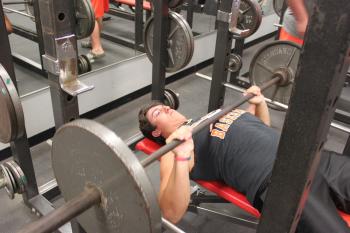 LeBlanc works out, getting himself as strong as possible before the football season starts.

This time last year, Reese LeBlanc of Delcambre weighed a few dozen pounds less and was not as much of a talker as he is this year.

The change comes in the form of a lifestyle change and a realization that he has to become an on-field leader.

LeBlanc, a senior this year at Delcambre High, knows he’s got to be a good leader on the field if he wants the Panthers to be competitive.

“Every year, when good seniors graduate, people think the team is going to be a little worse afterward,” he explained. “This year, it’s up to me and the other seniors on the field to prove we’re just as good.”

The Panthers have struggled in recent years with an increasingly tough district, dominated at the top by Catholic High of New Iberia and Loreauville, and a host of other highly competitive teams ready to vie to be in that upper tier of competition. This year, LeBlanc’s goal is to help his team get there.

“We need more playmakers,” he added. “And we have to make more plays.”

To make some of those plays, LeBlanc said he needs to be bigger and stronger. This time last year, he was 195 pounds. This year? 235.

That 40-pound difference comes thanks to a more intensive workout routine, as well as work with a nutritionist to make sure all the development comes right.

“I have confidence in the rest of my team to become playmakers, too,” LeBlanc said. “And we’re going to work on that.”

Some of those potential playmarkers include this year’s quarterback, LeBlanc explained.

“Cole Delcambre has an awesome arm,” he said. “He’ll fill that position well. Monty Rogers will definitely step up and make big plays on the field. He has a switch that goes off and he becomes a big playmaker.”

The key to making those big plays is a leadership trait LeBlanc strives to maintain - being smart on the field.

“We have to play smart,” he said. “We have to play as a unit, too. We can’t fall apart and blame it on other people, which is something we did last year, and we can’t afford to do that.

“And this year, you can tell we’re doing that,” he added.

The changes he has to make to become that onfield leader aren’t over with yet, but the strides he’s made are noticeable.

“Gaining 40 pounds is substantional muscle gain,” he said. “But when the season starts, we have to show everyone that we’re as good as the guys who left last year. We have to prove to them that we can be better than everyone thinks we are.