Harrington takes crossfit to another level 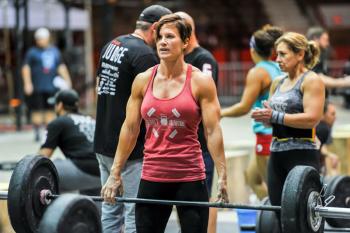 What a difference a year makes.
A year ago, Tiffany Harrington’s husband, Coby, signed her up to compete in the Ragin Games in Lafayette. At the time, Tiffany did not know he did that, so when the weekend approached, she was not mentally and physically prepared to compete.
So, fast forward a year later and this time, there was no backing out.
Tiffany signed up on her own to compete in a her first-ever individual crossfit competition held in Blackam Coliseum.
At the age of 45, Tiffany competed in the Female Mater’s Division, which is the class for 40-year old and older.
Not knowing what to expect, Tiffany finished second in her age class. The defending champion from a year ago, won the master’s division again this year.
“I was very happy to finish second in my first individual competition,” said Tiffany. “What it did is make me more motivated to work harder and get better.”
The crossfit competition is timed event scored on how many reps a person does in a certain amount of time.
Crossfit is new to Tiffany. She has only been doing it for 3 1/2 years. She was looking for a workout after having her son, Eli, 3 1/2 years ago. She discovered crossfit and has now taken it to the next level. What was once a way to exercise three times a week has become a passion that she does five to six times a week.
“At 45, crossfit has made me the fittest person I have ever been,” she said. “It has made me want to eat healthy and focus on my overall health and fitness.”
Tiffany and Coby are owners of Planet Nutrition in Abbeville. She gets her supplements and nutrition from her health store. She also has a workout buddy, her husband, who is also into crossfit.
“He is the one who convinced me to join crossfit. He is a level two trainer and pushes me to get better.”
Tiffany is not settling for second place and now has the passion to win.
“Going into the competition I did not know what to expect. Now I know. I will be prepared.”