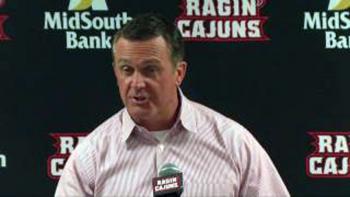 LAFAYETTE – The Louisiana Ragin’ Cajuns football team released their 2015 schedule on Friday, featuring six home games at Cajun Field for the first time in four years, a pair of nationally-televised ESPN contests, and a season-opening date at Kentucky.

The Ragin’ Cajuns will play their two most common opponents – Louisiana Tech and Northwestern State – during non-conference play, while completing a home-and-home series with Mid-American Conference opponent Akron. In Sun Belt Conference play, Louisiana will host Texas State (Oct. 10), ULM (Oct. 31), New Mexico State (Nov. 21) and Troy (Dec. 5), while traveling to face Arkansas State (Oct. 20), Georgia State (Nov. 7), South Alabama (Nov. 12) and Appalachian State (Nov. 28).
“It’s a very attractive schedule; the one thing I like about it is that we will play all six games at Cajun Field on Saturday for the first time since 2011,” Louisiana head coach Mark Hudspeth said. “We have had such great support at Cajun Field on Saturday’s, and that has helped create a great homefield advantage.
“We’re also honored that ESPN would choose us, once again, to play on two non-traditional nights. Those games will continue to give us great exposure and without losing a weekend game at Cajun Field.”
All home games on Louisiana’s schedule, along with all Sun Belt Conference road games, will be televised on an ESPN platform for the third consecutive year. All 12 games on the Ragin’ Cajuns schedule will tentatively be televised, including games at Kentucky (SEC Network) and Louisiana Tech (TBA).
“We’re excited with our 2015 football schedule and the incredible college football atmosphere that will be created for our fans with all six games at Cajun Field this season being played on Saturday,” Louisiana Director of Athletics Scott Farmer said. “Having two of our most common opponents in school history on the schedule will generate a lot of excitement for our fans, and we look forward to their support both at Cajun Field and on the road. Our game against Kentucky will provide us the chance to compete right away against a quality football team from one of the top conferences in the nation, and there is great balance in the schedule in that we will play consecutive road games once this season.
“With our two mid-week games on national television, along with nearly our entire schedule on an ESPN platform, our program will be able to create great exposure for both our University and our community, while reaching millions of fans across the country.”
Louisiana, which finished 9-4 in 2014 and claimed its fourth consecutive R+L Carriers New Orleans Bowl trophy, will open its season on Sept. 5 against Kentucky at Commonwealth Stadium. The meeting will be the first-ever on the gridiron between the Ragin’ Cajuns and the Wildcats.
The Ragin’ Cajuns will open their 2015 home slate on Sept. 12 at Cajun Field against Northwestern State in the 15th annual Herbert Heymann Classic. The meeting against the Demons will be the 76th between the schools in a series that dates back to 1909. Louisiana claimed a 49-28 victory in the last meeting between the schools on Sept. 17, 2005 at Cajun Field.
After an open date, Louisiana will remain at home as it will face Akron on Sept. 26. The meeting will mark the second between the Ragin’ Cajuns and the Zips with Terrance Broadway responsible for all five Louisiana touchdowns, including a pair in the fourth quarter, in a 35-30 victory on Sept. 21, 2013 in Akron.
Louisiana will travel to Ruston to face Louisiana Tech on Oct. 3 in the 87th meeting between the schools before opening Sun Belt Conference play on Oct. 10 against Texas State at Cajun Field.
The Ragin’ Cajuns will make the first of two scheduled nationally-televised appearances on Oct. 20 when it faces rival Arkansas State in Jonesboro, Ark. The Tuesday night game will be televised on ESPN2 and will mark the fourth straight mid-week contest between Louisiana and A-State dating back to 2012.
After facing the Red Wolves, Louisiana will return to action 11 days later on Oct. 31 when it plays host to ULM in a Halloween night contest at Cajun Field. The game against the Warhawks will mark the 13th game played on Halloween for the Ragin’ Cajuns and the third overall against ULM (1959, 1970).
The Ragin’ Cajuns will open the month of November with a pair of road games in a five-day span, beginning Nov. 7 against Georgia State in the Georgia Dome. Louisiana will then make its second nationally-televised appearance of the season on Nov. 12 when it travels to face South Alabama in a game that will be seen on ESPNU.
Louisiana will close out the regular-season with games against New Mexico State (Nov. 21), its first-ever trip to Boone, N.C., face Appalachian State (Nov. 28), and the regular-season finale against Troy (Dec. 5) at Cajun Field.

* - Sun Belt Conference game; home games in ALL CAPS
Times and additional television broadcasts to be announced
All dates and times are subject to change

SCHEDULE NOTES
• Louisiana will open its 114th season of intercollegiate football with a 517-528-34 record. The Cajuns earned their 500th victory in school history with a 70-7 win over Nicholls State on Sept. 14, 2013.
• Louisiana is one of five schools nationally to have won a bowl/postseason game in each of the past four seasons. The Cajuns, with four victories in the R+L Carriers New Orleans Bowl, are part of a list that includes Michigan State (Outback, Buffalo Wild Wings, Rose, Cotton), Oregon (Rose, Fiesta, Alamo, Rose), South Carolina (Capitol One, Outback, Capitol One, Independence) and Texas A&M (Meinke Car Care, Cotton, Chick-Fil-A, Music City).

• Louisiana and Oregon are the only two programs in the nation to win nine or more games in a season, including a bowl victory, in the past four years.

• The Cajuns will face three teams (Louisiana Tech – Heart of Dallas, South Alabama - Camellia and Arkansas State - GoDaddy) that competed in bowl games during the 2014 season.