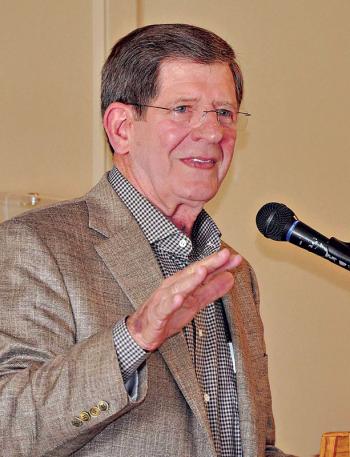 Don Briggs speaks to Vermilion Chamber of Commerce members about the oil and gas industry.

Vermilion Parish has the second largest amount of legacy lawsuits against oil and gas companies, which could hurt future drilling in the parish, according to an oilfield expert.
.Don Briggs, the president of the Louisiana Oil and Gas Association, spoke to about 70 people at the Vermilion Chamber of Commerce luncheon. He gave his forecast of the oil and gas industry in south Louisiana.
Briggs informed everyone that the drilling for oil and gas is down for a few reasons. There is hardly any drilling for natural gas because of cheap prices of natural gas today because of the large supply, he said.
Drilling for oil has increased throughout the United States because the price of oil is nearly $100 per barrel, which has enticed many companies to drill.
But Briggs told everyone south Louisiana is not seeing an increase in drilling like everyone else. Instead, drilling for oil is falling.
Six years ago there were 300 plus oil rigs drilling in south Louisiana. Today, there are less than 20.
What is keeping the large oil companies away from south Louisiana, knowing there is oil and gas under the land?
Briggs had a simple answer.
Lawsuits against companies who have drilled for oil and gas years ago.
There are 3,200 defendants in the 386 lawsuits against the Louisiana oil and gas industry in the court system today, he said.
Lawyers have convinced landowners who had oil and gas wells drilled on their land as early as 1901 to sue the big oil companies. Even if companies were doing what was legal under the rules and regulations at the time, companies are still getting sued over what was done years ago, Briggs said.
Cameron Parish has the most lawsuits filed with 64. Vermilion Parish has 44, followed by Acadia with 24. St. Mary has 11 and Lafayette Parish has 5.
Due to the legal climate, south Louisiana’s rig count is “crashing like the Titanic,” Briggs said. As the lawsuits continue against the industry, companies will not keep investing in Louisiana, Briggs said.
Briggs blamed trial lawyers for the large amount of lawsuits.
He said no oil companies are going to want drill in south Louisiana in fear of being sued. No drilling means less jobs, he added.
Despite the legal climate, the oil and gas industry is “changing before our eyes” especially over the past few years, Briggs said. In north Louisiana, the Haynesville Shale had 37 wells several years ago, he said. The number of wells is now up to more than 8,000 wells, Briggs said. The Haynesville Shale is one of the largest natural gas-producing sites in the U.S., Briggs said.
“Natural gas, of course, is climbing as the fuel for energy. Coal is declining, and it won’t be long before natural gas will be the primary fuel for power generation,” Briggs said.
Louisiana companies are starting to liquefy natural gas and ship it to other countries, Briggs said. The gap between consumption and supply of oil is getting close, which is good for the economy, he said.
The Louisiana Oil & Gas Association filed a lawsuit against Attorney General “Buddy” Caldwell on Dec. 13 that the association lost Monday. Briggs said the association did not expect to win the case, though.