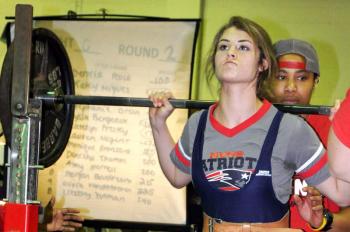 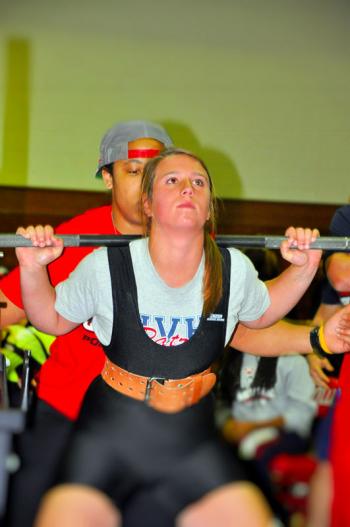 Holly Necaise, 14, is a North Vermilion freshman who squatted more than 200 pounds. 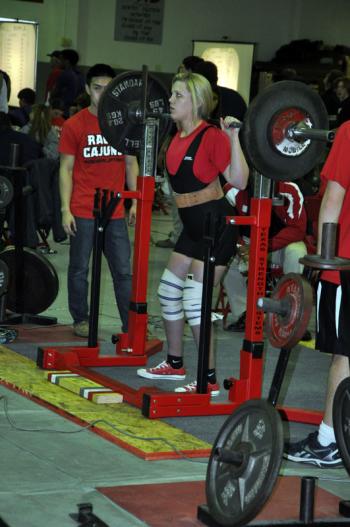 There is a new high school sport that is attracting more female students than male students. The sport is called powerlifting.
The sport, which was first sanctioned by the LHSAA three years ago, is growing throughout the state and is especially growing at two schools in Vermilion Parish.
North Vermilion High School has 17 females on the girl’s powerlifting team, which is only in its third year of existence. Abbeville High, in its first year of existence, has 16.
When NV powerlifting coach Kevin Kern began the program, he had two female students. In a short time, the NV girls program has made progress. Last year the NV Lady Patriots Powerlifting Team finished second at the regional meet and fifth at state.
“We have more girls than boys on the team,” said Kern. “The reason I think we have so many girls is because powerlifting gets them in shape. It also motivates them. They enjoy it a lot more. It is weird how they are attracted to it.”
The sport has attracted more girls over the last three years than the guys, he added. “Girls’ competing has doubled over the last three years,” he said.
NVHS and Abbeville High both have male and female powerlifting teams. This past weekend, Abbeville High School hosted an invitational powerlifting meeting in the gym. More than 125 athletes, male and female, competed. Teams from throughout Louisiana were on hand.
This Saturday, North Vermilion will be hosting its first-ever West Regional Meet. The top three finishers in each event go to state.
Because Abbeville’s meet was right before regionals, Kern had only his freshmen girls compete against the big schools. For most girls, it was their first meet.
NV freshman Holly Necaise, 14, has something in common with her father, David. He was a powerlifter at Chalmette High School; a high school located south of New Orleans.
“I’m doing this because I wanted to push myself for a goal,” said Necaise.
When the school was looking for girls to sign-up for the team, she never consulted her father and signed up on her own.
“I told him after I signed up,” she said. “He was glad and offered me encouragement.”
Monique Broussard, a NV freshman, signed up for the team because she wanted to change her body through weightlifting
“I like what it does to your body,” Broussard said.
There are 11 different weight classes in boys and girls competition involving Squat, Bench Press, and Deadlift.
The athlete competes in all three events and can win either one event (Squats, Deadlift or Bench) or be the overall winner.
The lifter in a certain weight class starts at whatever weight he or she wants, depending on how much they can lift. Example: A NV female lifter may begin her first squat at 200 pounds, where a female lifter from West Monroe may start at 240.
The lifter is judged on form and if he or she holds the lift a certain amount of time.
They get three lifts, and the heaviest lift is recorded.
The person who has the heaviest lift wins the event in their weight class.
Then, the weight amounts (Example: Squats: 250 pounds; Bench press: 200 pounds; and Deadlift: 300 pounds: Total is 750 pounds) are added up after the three events. The person with the most pounds lifted is the overall winner.
The athletes are divided up into weight classes: Boys weight classes include 114, 123, 132, 148, 165, 181, 198, 220, 242, 275 and Super Heavyweight. Girls weight classes are 97, 105, 114, 123, 132, 148, 165, 181, 198, 220 and Super Heavyweight.