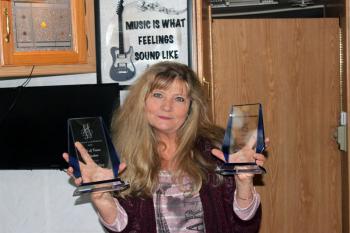 Judy Bailey shows off her awards received recently in her hometown of Winchester, Ky. Bailey lives in Abbeville.

Originally from Kentucky, country singer Judy Bailey has made a home in Abbeville for the last six years.
Bailey who had a top 10 hit “Follow the Feeling” with Moe Bandy in the 1980s, prides herself on inspirational songs. The singer/songwriter is certainly inspired by Abbeville, the city she calls home.
“There’s something about here that reminds me of home,” Bailey said. “The people here are just like the people I was raised with.
“They are good people who are good from the heart.”
Bailey recently returned to her hometown in Kentucky to take part in the inaugural Association of Local Musicians awards. The event took place at the Winchester Opera House in Winchester, Ky. She received Hall of Fame and Lifetime Achievement awards.
“I was more happy to see all of my old friends,” Bailey said of returning to her hometown for the awards show. “It hasn’t hit me that a I received this award.”
Bailey is no stranger to award shows. In 1981, she was a nominated as a top-five female vocalist by the Academy of Country Music.
“Juice Newton won that,” Bailey said. “I still can’t believe I was nominated. I remember being honored just to be there and being able to sing at the show.
“That was a big honor.”
Bailey is still singing all these years later. She recently recorded an inspirational album entitled ‘Ten Shiny Pennies.” It has been more than a year in the making.
“I have enjoyed peace in just writing this,” Bailey said. “When I was with Columbia and Warner Brothers back in the ‘-80s, I recorded everything that they told me to record.
“I was raised on inspirational country and Gospel music.”
In recording her new album, which she did at a friend’s studio in Nashville, Bailey has returned to her roots, and fulfilled a request made by her late mother, Nellie Martin, in a serendipitous manner.
“My mother told me that I should stop making that old country music,” Bailey said. “She told me that I should go back to making country/Gospel music. My mother died on Nov. 17, 1999. I recorded this album on Nov. 17 of last year.
“I can’t believe that it worked out that way.”
Wednesday would have been her mother’s birthday, by the way.
“I’ve got chills just thinking about how it has all worked out,” Bailey said. “I know this was from up above and all part of God’s plan.”
Bailey worked hard to make the plan work with her new album. She mailed demos to several labels, eventually receiving a positive call from Canyon Creek Records out of Tyler, Texas.
“They told me they wanted me on their label,” Bailey said.
One of the songs, “Down on My Knees,” has reached No. 51 on the Christian/country charts.
“I had no idea about that until they called me recently,” Bailey said. “I really proud of this because I did it myself, from my own brain. This songs came from my heart and up there (heaven).
“This is uplifting.”