VC gears up for Hanson 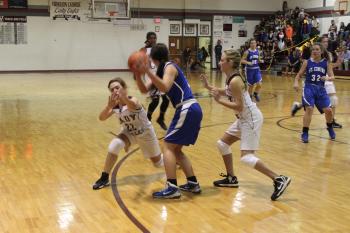 For the first time all season long, both of Vermilion Catholic basketball teams soaring high on three game winning streaks.

The Eagles are on their first three game winning streak of the season and they look to improve it to four games, as they play host to Hanson Memorial tonight at VC.

The Eagles currently sit in the 44th spot on the most recent power rankings.

With only nine games left, the Eagles are going to have to hustle to and get as many victories as they can.

They will try and start with Hanson.

According to coach Roch Charpentier they are going to need to improve in two areas; free throws and turnovers.

If the Eagles can improve in those areas and remain hot from the floor they will be setting themselves up well.

Mike Campbell was the leading scorer for the Eagles and has been quite in the scorebook for the past couple of games.

The Eagles will need him to step up if they are to get past Hanson.

The Lady Eagles are also riding high on a three game winning streak.

Although now the Lady Eagles find themselves in a bit of scramble mode, due to the ankle injury of Ashailee Brailey.

It is still unclear how severe the injury is, but according to coach Kim Guidry, she won’t play in the game tonight.

“It just gives someone else a chance to step up and get invaluable experience,” Guidry said. “They (Hanson) is a good team, and we will have our hands full with their two guards. We just need to make sure we play solid defense, and make them take
contested shots.”

The Lady Eagles are ranked third in the power rankings, and are now just looking for victories to improve their moral and make sure that they are playing their best basketball come playoff time.

The Lady Eagles basketball game is scheduled to start after the JV game, and that takes place at 5:30 p.m.