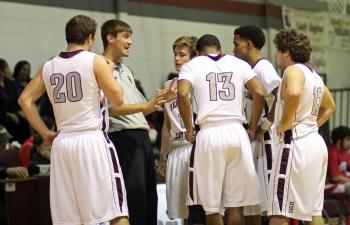 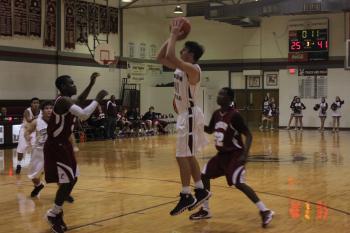 The winter storm that came through ruined a lot of peoples plans for the weekend, it also ruined the weekend for the VC Eagles and Lady Eagles basketball teams.

Instead of resting up both mentally and physically from a hard fought game on Friday night, both teams have to prepare to play in back-to-back games.

The Friday night games against Hanson have been postponed until Monday night.

The winter storm may have been a blessing in disguise for the Lady Eagles.

This past Tuesday in the Lady Eagles game against Midland, starting point guard Ashailee Brailey went down with what looked to be an apparent ankle injury.

Due to the injury Brailey sustained, there was only the tiniest of chances that she was going to play in the game against Hanson.

Now that the game has been moved back because of the winter storm, the chance better that she will be able to play Monday night.

“We are just taking it one day at a time with her (Ashailee),” Lady Eagles Head Coach Kim Guidry. “We are just going to keep checking her ankle out and she will go when she can. If she can’t go, then someone will just step up and get some incredible
experience. Either way it makes us a better team, and better prepares us for the playoffs.”

The winter storm pushing the game from Friday night to Monday night does pose one possible problem for the Lady Eagles, playing games on back-to-back nights.

It won’t be the first time the Lady Eagles have played on back-to-back nights.

They are quite used to it because of the tournament season at the beginning of the year.

These games are a little more important though because they are both district games, and playoffs could possible be on the line.

VC is currently ranked third in the power rankings, and Hanson, their opponent on Monday is night is ranked 18th.

Then they have to turn right around and play a team in Ascension Episcopal that is on the bubble at 33rd.

According to coach Guidry the team will be prepared for whatever is thrown at them.

The only other team feeling the stress of back-to-back games is the Eagles basketball team.

“I don’t think the game being pushed back is going to bother us that much,” Eagles Head Coach Roch Charpentier. “We have practiced and prepared all week, so regardless of when the game is played we should be prepared. I’m going to try to save the kids
legs this weekend, so they will be well rested tomorrow and Tuesday.”

The Eagles are in desperate need of some big wins in these two games.

The Eagles currently sit in the 45th spot in the power rankings.

Hanson is ranked 26th and Ascension Epsicopal is ranked 17th.

So wins in both of these game will go a long way in helping the Ealges chances of making the playoffs.

“These are two really big games for us,”Charpentier said. “We need to win both of these games to help us with our power rankings. That’s a lot of pressure as it is, but now we have to do it on back-to-back nights. I’m pretty sure we are ready though.”

The one bright spot for the Eagles is that both Hanson and AES are similar teams according to coach Charpentier.

“Hanson and AES are both well disciplined,” Charpentier said. “They take good shots and don’t turn the ball over, and that’s something we have to do.

“Turnovers have been a problem for us, and we have to fix that. Along with turnovers, we have to do our best to shoot a higher percentage because this is basketball and the only important thing is putting the ball in the hole.”

Again, just to recap, the VC was suppose to play Friday night against Hanson has been rescheduled for tomorrow night at 5:30 p.m., is when the Lady Eagles will take the court and the Eagles will follow shortly after.

Then the very next night both the Eagles and Lady Eagles will travel to take on Ascension Episcopal.

The Lady Eagles game will begin at 5:30 and the Eagles will follow.