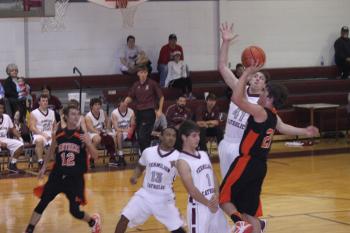 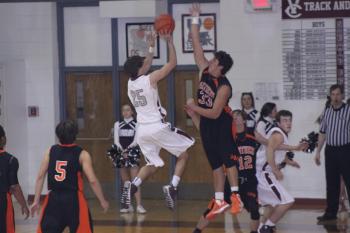 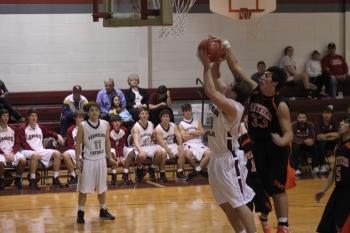 The Vermilion Catholic Eagles’ season hasn’t gone as swimmingly as they would have hoped for, but they are starting to turn things around.

They have started turning their season around by going on a three game winning streak.

The third win of this current streak came against the Delcambre Panthers, Monday night, by the final score of 60-39.

“We had a pretty good shooting night,” Eagles Head Coach Roch Charpentier said. “We need to shoot more free throws and at a higher percentage, but overall we rebounded well and shot the ball better than we have all year.”

That shooting performance was prevalent from the start for the Eagles.

The Eagles were able to score 16 points in the first quarter, thanks in part to starting point guard Brennan Gallet’s six points in the opening quarter.

The defense held strong too, only allowing the Panthers to score seven points.

The second quarter, at first, seemed to be all VC. The Eagles found themselves up by 12 points about midway through the quarter and then things changed.

The Panthers just started hitting all of their shots and VC had no answer for it.

When the halftime buzzer sounded the Panthers had fought back from 12 points down to only four points heading into the halftime break.

The Panthers were expected to make a run coming out of the halftime break, considering all of the momentum they had gathered before the break, but things could not have been different.

The Eagles came out and played like a team possessed.

From the opening horn of the third quarter till it was over the Eagles never gave the Panthers an inch.

The Eagles scored 23 points in the third quarter, behind seven points from Gallet and six points from Shay Leporte.

The defense also stepped up and held strong for the Eagles, and only allowed the Panthers to score nine points.

When the third quarter ended the Eagles lead had grown from four points to 18.

“I’ was most proud of the way the guys responded,” Charpentier said. “They (Delcambre) made a run and we were able to respond with a run of our own. I told them at halftime that we need to come out in the third quarter and take a lead, and then put them
away in the fourth quarter. They did just that, and I could not be prouder.”

Like coach Charpentier said, the Eagles put the Panthers away for good in the fourth quarter by not allowing them to get anything going on the offensive side of the ball.

The Eagles offense was only able to score 13 points in the final quarter, but it was plenty as the defense for the Eagles held the Panthers to just 10 points.

The lone dark spot on the Eagles performance on the night was the amount of turnovers they had. The Eagles turned the ball over 19 times.

The Eagles were led by the scoring output of Brennan Gallet.

Gallet scored a team and game high 15 points. Seven of his 15 points came in the big third quarter for the Eagles.

Sway Laporte also had a big third quarter, scoring six of his 13 points in the third.

Drake Broussard was able to get in on the scoring action as he added 11.

William Noegel netted seven of his own points, six of which came in the second quarter.

Tyler Lege rounded out the scoring for the Eagles with his four points.

This win gave the Eagles a three game winning streak and bumped their record up to 5-10 overall and 2-2 in district play.

The Eagles will be back on the court Friday night as they will host district rival Hanson.

“We just made a lot of mistakes,” Trangmar said. “That and we just didn’t run our offense the way we needed too. We did in the second quarter but we just couldn’t get it together for the rest of the game.”

Alex Barras and his 13 points led the Panthers in scoring.

Chevaun Walters was able to add 10 points of his own.

Tyler Deblanc and Brayton Broussard rounded out the scoring for the Panthers with one point each.

The Panthers record now sits at 3-12 overall and 0-4 in district play.

The Panthers will continue to stay on the road as they will travel and play David Thibodeaux this Friday night.