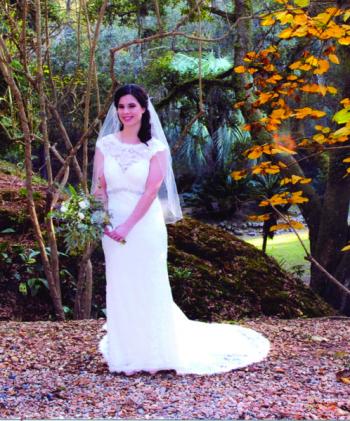 Miss Michelle Hardy Abbeville and Mr. Justin Wilbanks of Ethel, LA were joined in marriage during a ceremony held on Saturday, January 14, 2017, at Acadian Village in Lafayette.
Pastor Steve Horn officiated the 5 p.m. ceremony.
Parents of the bride are Laura and Edward Hardy II of Abbeville. Grandparents are Johnnie and Edward Hardy and Codrey Menard and the late Eves Menard, all of Abbeville.
Parents of the groom are Tracy and Ronald Wilbanks of Ethel, LA. His grandparents are Rita and Vernon Hartdegen of Baton Rouge, and Mary Jane and Jerry Wilbanks of DeRidder, LA.
Music for the ceremony was provided by Lauren Baker, violinist.
The mother of the bride was escorted by Matt LeMaire. The mother of the groom was escorted by Ty Thibodeaux.
Escorted by her father, the bride wore an elaborate patterned lace gown over a rich imperial crepe spaghetti strap sheath gown. The bodice boasted a stunning illusion collar and lace back with semi-cap lace shoulder straps. Her ensemble was completed with a fingertip veil.
She carried a natural clutch bouquet of greenery, gray succulents, fern, touch of baby’s breath, tulips, fresh lavender with a lace ribbon.
Amanda Hardy, sister of the bride, served as maid of honor. Elizabeth Hardy LeMaire, sister of the bride, served as matron of honor.
They carried bouquets of greenery, ferns, white tulip, gray succulents wrapped in twin ribbon.
Best man was Ronald Wilbanks. Caleb Well served as the groomsman.
The reception was held immediately following at the Acadian Village Stutes Building.
After a wedding trip to Gatlinburg, TN, the couple will reside in Zachary, LA.