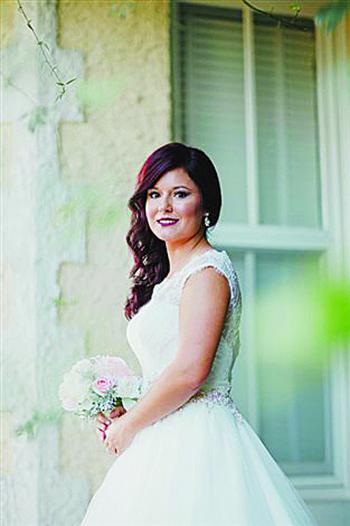 Miss Erica Danielle Miller of Crowley, and Mr. Christopher Cecil Piazza of Abbeville, were joined in holy matrimony during a Mass on Saturday, November 14, 2015 at St. Mary Magdalen Church in Abbeville.
Father Louis Richard officiated the 6:30 p.m. nuptials.
Parents of the bride are Gregory K. and Kayla Miller of Jennings and the late Marilyn Janet Jones of Crowley. Her grandparents are the late Mr. and Mrs. Andrew Jones Jr. of West Monroe and Mr. and Mrs. Richard Miller of Eunice.
Parents of the groom are Mayor Mark F. and Suzanne H. Piazza of Abbeville. His grandparents include the late Gerald C. Harrington and Joy Harrington of Abbeville, the late Bertha D. Zaunbrecher of Rayne and Abbeville, the late Mr. and Mrs. Paul F. Piazza of Abbeville.
Music for the ceremony was provided by Tommy Guidry, organist and Maestro Xiao-Lu Li, violinist.
Readings were given by John Listi, godfather and cousin of the groom; Jeri Sonnier, godmother and aunt of the groom and Taylor Istre, step-sister of the bride.
Ushers included Thomas Leger and Gabe Giffen, friends of the groom.
The mother of the bride was escorted by Thomas Lege. The mother of the groom was escorted by the groom and her husband.
Escorted by her father, the bride wore a gorgeous designer ball gown fit for a princess from the Stella York collection featuring a sheer lace neckline with a sweetheart cut underneath, a fitted lace bodice and a tulle skirt. Unique detailing includes diamante beading in a floral vine pattern at the natural waist and an elegant lace keyhole back which zips up under sparkling crystal buttons. The lace and tulle is featured in an ivory color chosen by the bride. Her veil was cathedral length, also in ivory. She complemented the ensemble with a diamond necklace from her late mother.
For her special day, the bride carried a mix of cream and blush flower including peonies and garden roses with dusty miller as an accent. Lace taken from her late mother’s wedding gown adorned the bouquet.
Lindsey Miller, sister of the bride, served as maid of honor. Matron of honor was Emily Lemoine, friend of the bride. Bridesmaids included Shayna Arceneaux, Andrea Johnson, Libby Faulk, Aimee Bitler, Julie Milan, Jill Parrott and Renee Walker, all friends of the bride. Junior bridesmaid was Emilie Miller, sister of the bride. The flower girls were Anslee Miller, sister of the bride and Paisley Parrott, friends of bride.They carried a smaller version of the bride’s bouquet and wore an Alfred Angelo designer long bridesmaid gown featuring a draped bodice and elegantly gathered floor length skirt. Halter straps criss-crossed along the back neckline with an asymmetric bow detail featured in ‘Once Upon A Time’, all in a beautiful slate blue color chosen by the bride.
Charles Piazza, brother of the groom, and Zayne Greene, friend of the groom, served as best men. Groomsmen included Jean Paul Ducrest, Trey Lemoine, J. P. Broussard, Phillip Meche, Broc Prejean, Corey Meaux and Phillip Legere, all friends of the groom. Ring bearer was Manning James, cousin of the groom and Bradley Ducrest, friend of groom. The junior groomsman was Benjamin Miller, brother of the bride.
The groom chose a Vera Wang, two button, grey super 120’s notch lapel with navy vest and tie for his groomsmen and the same tuxedo for himself, but with an ivory vest and tie.
Following the ceremony, a reception was held at Magdalen Place catered by iMonelli.
Upon their return from a wedding trip to Antigua, the couple will reside in Crowley.
A rehearsal dinner was held on Friday, November 13 at the Caldwell House hosted by the groom’s parents and catered by Marcello’s.