No. 3 Lady Bobcats, No. 4 Lady Patriots in parish finals 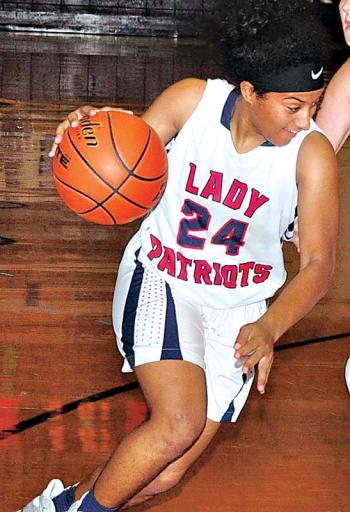 Aleria Bolden for NV is all smiles after reaching the finals.

The No. 1 seed and the No. 2 seed were eliminated by lower seeds in the semifinals of the parish finals.
No. 3 seed North Vermilion beat No. 2 seed Gueydan, 38-30, on Friday.
The Lady Patriots will the defending champs, the Erath Lady Bobcats, in the finals on Saturday night.
In the NV/GHS game, the 8-0 Lady Patriots led by only three, 21-18, at halftime.
When the third period began, the Lady Patriots stayed in the locker room two minutes over. However, when they got on the court in the second half of the semifinals, it was all business.
NV went on a 13-5 run and led 34-23 at the end of the third period.
GHS came back and went on a 6-0 run, cutting it to 34-26, but the Lady Patriots managed to hang on and win.
Kyler Walker and Kaylee Lopez each had 10 points for NV. Gabby Broussard scored 8.
The Lady Patriots shot 23 percent at the line (3-of-13).
Ke’Ara Charles paced Gueydan with 14 points.

KAPLAN - The third time was the charm for the Erath Lady Bobcats.
VC had beaten Erath twice before, earlier in the season. In the semifinals of the parish tournament, Erath won the third meeting, 45-36, on Friday.
Monette Bolden led EHS with 21. Alexis Lege added 10. Lexi Gisclair chipped in with seven for EHS.
For VC, Ainsley Mallet had 14 and Kelli Frith scored 13. She was 8-of-8 at the free throw line.