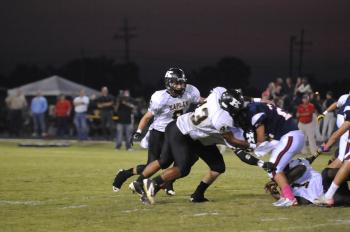 Pascual (43) tackling a North Vermilion ball carrier in their match-up from 2013’s season.

The summer has proved to be a somewhat cooler one than past years (in fact, early forecasts for the latter part of the week predict as low as the mid-80s by Friday), but it’s still a warm one, Pascual said. And it’s not over yet.

“One of my biggest takeaways from last year is that I got tired too easily,” he said. “I can’t let my team down by getting tired in the middle of a game this year.”

This year is his senior year, and he accepts the responsibilities that come with it. More than that, though, he uses that to push himself further.

“I don’t think he missed a single workout day this summer,” Stephen Lotief, head coach of the Kaplan Pirates, said. “He’s a great kid. Good attitude. He’s got the kind of things you look for in a leader, and in a human being.”

Pascual’s work on the field over the past two years speaks for itself. He’s been a solid defensive athlete for the Pirates, making key tackles and picking off a few passes. But it’s his character that has his coaches so impressed.

“You won’t find a better kid out there,” Sam Taulli, one of the assistant coaches said.

Pascual’s appeal comes from his work ethic, and he hasn’t let up on himself this summer.

According to Pascual, before and during the summer, the team ran together a lot, and he says it’s helped him feel better. “I’m no longer letting that tired feeling get to me, and I feel tired a lot less,” he explained.

He’s got to step up, he admits, to fill the gaps left in the wake of last year’s graduating seniors. “Leadership is an important role, and last year, they did a really good job.

“They left a really big hole for us to fill,” he added. “But I think we can do it, and assert ourselves to be good seniors.”

As a senior, he has welcomed the responsibilities that come with the age.

“You basically, at this point and beyond, have to rely on yourself,” he said. “You have to keep yourself out of trouble. You have to stay straight, stay on the path, and don’t stray at all.
“And, above all, you really have to live it.”