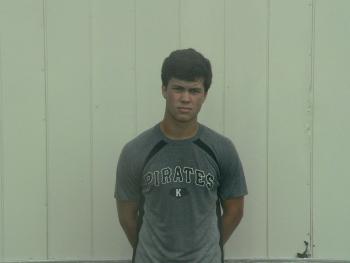 When asked to pick a player to profile for this year’s Kaplan Pirates football squad, the answer was easy for coach Stephen ‘Tank’ Lotief.
“John works hard all the time,” Lotief said. “Last year he played probably eighty percent of the snaps but he got none of the credit. He was one of the guys who stayed on the field the whole time but he works hard all the time. There’s no slow step in John,” coach beamed.
“I'm looking forward to him being a really important player for us this year,” Lotief said.
Senior John Gordy Broussard plays both tight end and strong safety but when asked which he preferred, it was obvious he enjoys to hit.
“Strong safety for sure.” He was also quick to share the spotlight with his teammate standing nearby during the interview to praise the passion he provided for the team.
When asked which teammate he could count on for anything, Broussard immidiately credited fellow senior and linebacker DeAngelo Martin.
“He’s a leader, he works hard and when somebody is down he’s always giving them encouragement and making everybody work harder. He just brings a fire to the team.”
Whether lining up on offense or defense, Broussard will be a force to be reckoned with during the upcoming season.