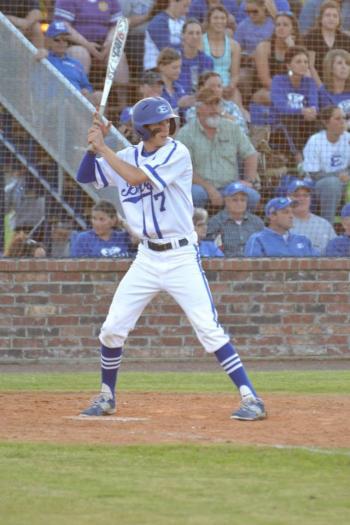 When asked which of his players were set to become not only a great player, but a great man, Gulf Coast Bank Abbeville 29er’s coach Darin Desormeaux didn’t hesistate bringing up outfielder Erik Belanger.
“Erik means the world to me,” said Desormeaux.
“I’ve coached him for several years, dating back to when he was 10 years old. It is truly amazing the young man he has turned out to be.”
Desormeaux has no doubt his current success will only blossom.
“Erik will succeed in life regardless of anything he puts his mind to. He’s a great person with a good head on his shoulders.”
As an athlete, coach added, “Erik is a coach’s dream. If he was ever asked to play behind the fence in the outfield he would just go do it and never ask why or frown about it. Erik is a very remarkable person in my eyes.”
Belanger, a multiplayer athlete playing both football and baseball, recounts his favorite high school memory as beating North Vermilion baseball at home this past year.
“It was tied in the bottom of the eighth, I believe,” Belanger said. “I was up to bat and we called a suicide squeeze with a runner on third and we ended up getting him in and we won.”
Even in adversity and when the chips are down, Belanger handles his losses with grace. “I go home, I think about what went wrong, what else we could’ve done as a team. I realize the sun is going to come up the next day and I get back to work.”
As a multisport athlete, Belanger prefers baseball citing Craig Biggio as his favorite player. “I think I’d rather play baseball professionally. I’d love to play for the Red Sox, no doubt.”
Getting back to American Legion, Belanger assured that the teammate he could most count on was Taylor Abshire. “ He and I grew up together pretty much. I’ve known him so long,” Belanger added.
As the American Legion League plays out, Belanger hopes he and Abshire can keep the winning going and advance to the next regional round.
One thing is for sure, Erik Belanger is definitely a guy you can root for.