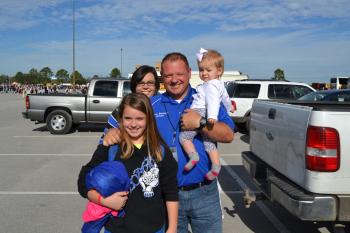 Kenny Broussard and his family.

Kenny Broussard, the EHS band director was recently named the 2014-15 Erath High Teacher of the Year.
Broussard is a 1996 Erath High School Graduate, and a 2001 graduate of McNeese. He began teaching in Delcambre in 2002 as an assistant band director where he stayed for two years. Following tenure there, Broussard then found himself back in his hometown, Erath. He worked at Dozier Elementary and Erath Middle and eventually became the head Erath High Band Director in 2005.
Broussard credits his former Band Director David Campos for his career path and stated how much his former teacher “changed and affected his life”. Broussard added that he “loves teaching and strives to make a difference in his students’ lives as well.”
Erath High Principal Marc Turner stated “Kenny’s dedication in making a difference with his students is evident at all times. He loves what he does and it shows when he works with our students.”
Broussard is married to the former Amber Laplace. Together they have two daughters, Jada and Ellie.