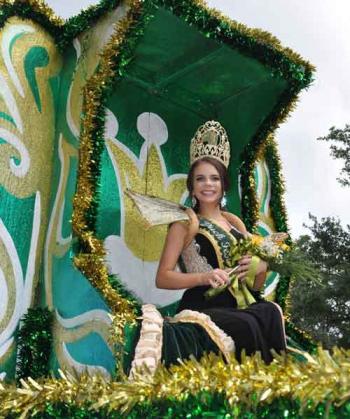 GUEYDAN - The stage was set and waiting for a Queen to be chosen, Saturday, August 27, 2016.
With all festival excitement in the air the crowd held their breath for the 2016 Duck Festival Queen to be crowned. The contest had three beautiful young ladies, hoping to be the one crowned. In the end, the crown was placed on Shelby Lane Mouton of Gueydan.
The 17 year old, five foot three inch beauty is a Gueydan High student and a member of the United Methodist Church in Gueydan.
Shelby wore a beautiful black evening gown with silver side encrusted accents along the top side bodice, her beauty shined and sparked throughout the morning and once on stage se capture the crowd’s attending with her commercial about the festival. The 2015 Queen Emily Ogea placed the prestigious crown on her head.
Making the top two and the 2016 Duck Festival Queen’s Court are, first runner up; Shelby LaBuff and second runner up; Morgan Tyler.