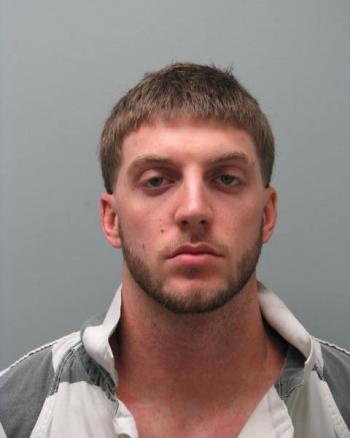 Chase Trahan was arrested by the police.

Due to the increased vehicle burglaries, patrol officers with Abbeville Police Department were providing foot patrol through an apartment complex on the 2700 block of Rodeo Road during the early morning hours on Saturday.
The officers observed a white male subject walk from the tree line on the north side of the apartment complex. The subject was seen entering a vehicle through a window. As the officers approached the subject inside the vehicle, they identified themselves.
The subject fled on foot from officers. The subject led officers on a foot chase throughout the Apartment Complex. The officers lost sight of the subject, but a perimeter was quickly established and the subject was contained to one building.
After a short time of searching, the male subject was located on the second floor of an apartment building. The subject stripped his clothes off and was only in his underwear. The subject hid his clothes under a door mat.
Once the subject was again confronted by officers, he fled again. The subject was apprehended within seconds.
The subject was identified as Chase Obray Trahan, 21, of Rodeo Road in Abbeville.
During the investigation, it was learned Trahan did not own the vehicle and did not have permission to be in the vehicle he was found in. A second vehicle, right next to the vehicle Trahan was located in, was burglarized as well.
Trahan was charged with Simple Burglary and Resisting an Officer. Trahan was booked into the Vermilion Parish Correctional Center. More charges are pending further investigation.
On Saturday, patrol officers and Criminal Investigators teamed up and executed a search warrant on Trahan’s residence on Rodeo Road in connection with the ongoing investigation.
Abbeville Police Chief Tony Hardy would like to commend the Officers for an outstanding job. “These Officers did a great job and took a burglar off the streets. This is one step closer to making Abbeville a safe city. Great job to all the officers involved,” said Chief Hardy.