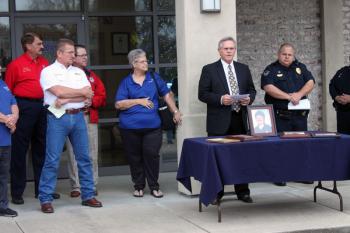 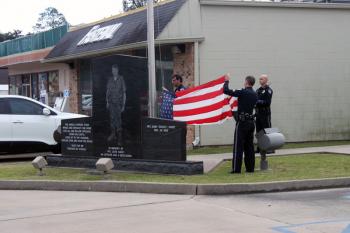 Members of the Police Honor Guard change out the flag during the John “Dooley” Hardy Memorial. 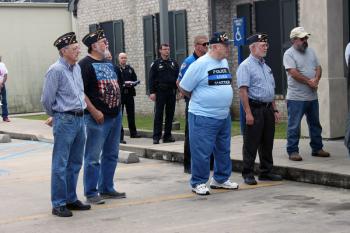 As they do each year, family and friends of those lost in the line of duty gathered to pay tribute during the John “Dooley” Hardy Memorial.
The service took place on Friday morning at the Abbeville Police Department. The event is held each year by the Fraternal Order of Police John “Dooley” Hardy Memorial Lodge 48, honoring fallen officers from Vermilion Parish. Those in attendance also paid respect to the 138 officers nationwide, including nine from Louisiana, lost in 2016.
“We want to thank all who attend,” Abbeville Police Chief Tony Hardy, John Hardy’s brother, said. “This is a big deal for law enforcement.”
Officers from Vermilion Parish who gave their lives in the line of duty include Hardy (Dec. 24, 1992), Todd Touchet (Jan. 8, 2000) of the Vermilion Parish Sheriff’s Office, Rodney Trahan (April 6, 1969) of the Kaplan Police Department, Otto Bourque ( Nov. 3, 1964) of the Erath Police Department, and Allen Bares Jr. (June 23, 2014) of the Vermilion Parish Sheriff’s Office.
District Attorney Keith Stutes served as the guest speaker for the memorial.
“They were our protectors,” Stutes said. “They were brave sons of Vermilion Parish who gave the ultimate sacrifice.
“These heroes need to be remembered.”