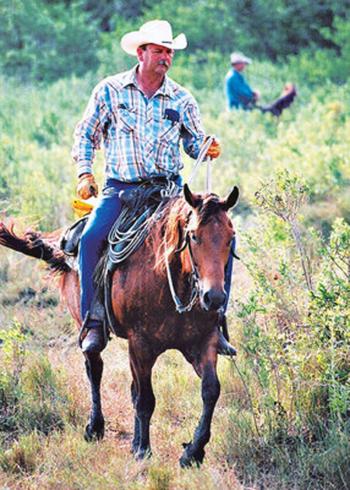 The Vermilion Parish cattle industry has lost one of its own with the passing of Bryan Veazey.
Veazey, 64, of Pecan Island passed away last Friday, April 3.
Funeral services will take place with an 11 a.m. Mass of Christian Burial at Sacred Heart Catholic Church in Pecan Island. Veazey will be laid to rest at Sacred Heart Catholic Cemetery.
The Louisiana Cattle Festival named Veazey its Cattleman of the Year in 2011, a fitting honor for someone who had such an impact on the industry in Vermilion Parish. He was a board member of the Vermilion Parish Cattlemen’s Association for 25 years and served as president in 1990 and 1991.
“He was a very good man,” LSU AgCenter Extension Agent Andrew Granger said. “He was very supportive of youth beef activity. He and his family were heavily involved in that for a long time. They sponsored the Brahman show at the Vermilion Livestock Show.
“He will be greatly missed.”
Veazey began his career in the cattle business as an 18-year-old in 1969. He worked for many years along side his father, Glenn, building at one time the largest herd of cattle on Pecan Island.
“At one time he and his father ran about 700 head of cattle,” Granger said. “He also had a herd of purebred Brahmans.”
Veazey held strong to traditions of the cattle industry. He and his father would drive cattle from Pecan Island to Mulberry Ridge on the Gulf of Mexico. Those cattle drives were a highlight for many in the area.
“They were some of the last to do that,” Granger said. “They would drive them to Mulberry to graze for the winter and then drive them back to Pecan Island for the summer.
“They were doing that up until the storms.”
Threats from hurricanes and tropical storms, including the storm surge from Hurricane Rita, led to Veazey selling his cattle business to a commercial company. Veazey remained involved on a smaller scale with Brahman cows and crossbred cows in recent years.
Veazey served on several Louisiana Cattle Association committees over the years, including  Extension Beef Advisory Committee. He represented Vermilion Parish at conventions around the state.  Veazey and his family helped raise thousands of dollars for the Louisiana Cattle Association with Vermilion Cattlemen’s barbecues on Pecan Island.
Veazey also served on the board at Abbeville General. He was a member of the Pecan Island Volunteer Fire Department and a parishioner at Sacred Heart Catholic Church in Pecan Island.
He is survived by his wife, Linda Breaux Veazey; his son, David Aaron Veazey and his wife, Connie; daughter, Jamie Veazey Girouard and her husband, Adam; his mother, Ina Broussard Veazey; two brothers, James Glenn Veazey and Deryl F. Veazey and his wife, Michelle; two granddaughters, Charly McKenna Veazey and Lily Ann Veazey; and a grandson, Lane Ellery Girouard.
He was preceded in death by his father, Jacob Glenn Veazey; and niece, Stacy Veazey.