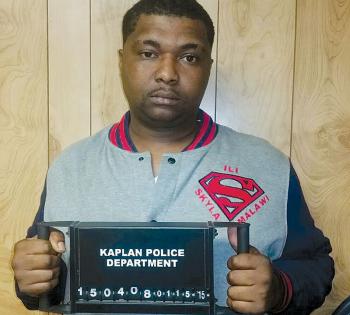 Shaylon Trevonne Alexander of Kaplan received one of the highest bails ever handed down in Vermilion Parish on Wednesday. Judge Stanton Hardee set bail at $2.5 million for Alexander on multiple attempted second murder charges, attempted first degree murder charge on a peace officer and seven counts of disarming a firearm.
As of Wednesday at 10 a.m. Alexander was still locked up behind bars.
Alexander, 28, was arrested in Kaplan by the police department.
He allegedly fired several rounds at the victim’s vehicle.
When the Kaplan police tried to stop Alexander, he tried to run over the police officer and the victim.
Here is a breakdown of the charges and the bail amount of each charge.
• 7 counts of discharging a firearm in the city. $20,000 bond on each count: Total bond for that charge is $140,000
• 8 counts of attempted second degree murder charge. $250,000 bond for each count. Total bond amount for those charges is $2 million
• 1 count of attempted first degree murder of a peace officer. Bond set at $300,000
• DWI Second offense. Bond set at $3,000
• Aggravated flight from a police officer. Bond is set for $5,500.
If found guilty on all charges, he may be spending the rest of his life in prison.