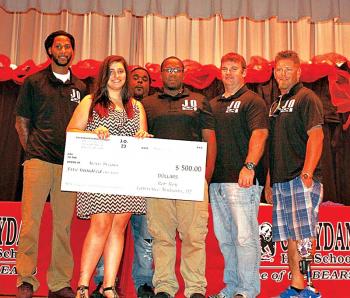 Jason O’Brien excelled on the football field while at Abbeville High School, a level of play he continued at Northwestern State University.
During his time at Abbeville, O’Brien earned 1st team All-District at All-Parish honors three straight years. He was named All-State Defensive Player of the Year during his senior season. At Northwestern, he helped lead the Demons to a conference title in 2005 and earned 1st team All-Conference honors.
O’Brien continued his success after earning a bachelor’s degree in 2007. The City of Abbeville named him at its parks and recreation director in 2010. O’Brien died suddenly on Dec. 26, 2011.
The Vermilion Football League (VFL) in Abbeville, with which O’Brien, worked closely, has created the Jason O’Brien Memorial Scholarship.
“Jason is remember as a very passionate and hardworking person,” said Jonathan Lovett, a board member for the scholarship fund. “He worked very hard and was dedicated to making Abbeville and Vermilion Parish a better place for kids.
“We feel this scholarship is going to keep his memory alive.”
The scholarship will be awarded each year to a Vermilion Parish graduate. Representatives of the VFL presented the first Jason O’Brien Memorial Scholarship to Gueydan High’s Alexis Breaux.
For those who know her well, Breaux is well deserving of the honor. Gueydan High Band Director Brock Meaux has worked with Breaux since she was an eighth-grader.
“In this five years I have seen countless examples of her talent and maturity,” Meaux said. “I have long been impressed with her diligence, leadership and work ethic. Alexis has always shown the ability to rise to any occasion and she is an exemplary leader.
“She is an asset to the entire community.”
During her time at Gueydan High, Breaux took part in several clubs and organizations, including the Beta Club, Drama Club, Literary Club, French Club and 4-H, for which she won multiple awards.
Breaux excelled in band. She earned First Chair Clarinet during her junior and senior years. She won the award for Most Improved band member during her freshmen year and won Most Outstanding member two years later.
Breaux is also active in St. Peter’s Catholic Church and served as a volunteer at the Crowley Animal Shelter.
“These experiences helped her mature and be ready for college life,” said Gueydan teacher Melanie Hensgens, who taught Breaux in multiple math courses. “She has developed a strong work ethic and I have no doubt she will succeed at the university level.”