Erath deals with another flood 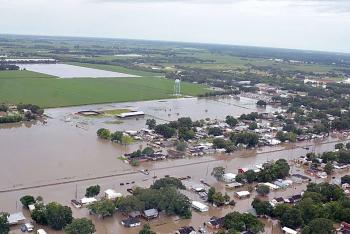 Many homes in Erath were flooded because of rain and high water. The bypass was underwater.

An important part of Erath’s recent history is the town’s resilience in recovering from Hurricane Rita.
The people of Erath know how to plan for one of the most powerful forces of nature. Except this wasn’t a hurricane. The effects of record rainfall from this past weekend remained through Monday afternoon.
“We still have water in parts of the town,” Mayor John Earl LeBlanc said. “This is completely different from a hurricane. A hurricane comes in an a couple of days later things are finished. Even if you get a tidal surge, around five days later the water recedes. Right now, we are sitting on hold because we don’t know what’s going to happen.”
The forecast does not help.
“We’ve got a south wind and the forecast calls for 60 percent rains,” LeBlanc said. “If we get more rain, what has receded will be back where it started.”
Homes did flood. LeBlanc said there is no a number yet. The downtown area was not greatly affect. The flood wall protected Dozier Elementary.
“South Broadway always floods,” LeBlanc said, “Now, North Broadway flooded. All the streets north of the railroad track leading to the By-Pass flooded.”
LeBlanc stressed one of the biggest problems is drivers who are not needed on the roads.
“We are trying to keep people from coming in to sight see,” LeBlanc said. “They are pushing a wake that is putting water in homes. People don’t need to come in to an area like this to sight see.”
One thing seen that has been similar to recovery from Rita is the town’s people stepping up.
“I don’t know what more I can say about our town employees and the police department,” LeBlanc said. “They have worked non-stop. We have had so many citizens offer to help. People who have there own issues to deal with are calling to see what they can do to help. This is from people not even from inside Erath. I don’t know how you can thank that kind of generosity.
“It’s simply amazing.”
Public officials have reached out, too. LeBlanc, who was among local leaders who met with Gov. John Bel Edwards on Monday, said he has heard from local Rep. Blake Miguez, Sen. Jonathan Perry, U.S. Rep. Charles Boustany and Attorney General Jeff Landry, among others.
“They have all shown concern for us,” LeBlanc said.
This wasn’t a hurricane. Response and recovering will be different.
“It it were a hurricane it would be different,” LeBlanc said. “When you get 23-and a half inches of rain in 30 hours, it’s just one of those things you can’t prepare for.
“It’s been unbelievable.”
The people of Erath have shown unbelievable resolve in receiving from Rita. That will once again be on display in moving past this.
“Of course we will,” LeBlanc said. “We’re Cajuns.”