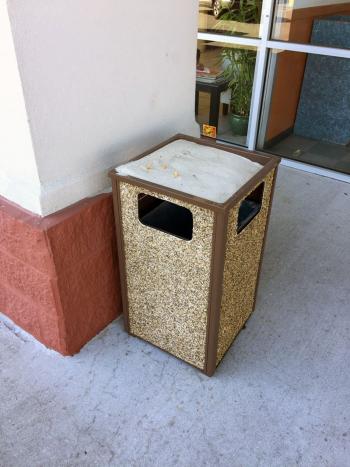 Councilman Francis Touchet Jr. said he would like to see
retail developments have more trash cans near stores.

It’s common sense, that trash goes in a trash can.
Councilman Francis Touchet Jr. said he has found a problem in that regard as he drives around his district and other parts of the city.
“A lot of development has taken place in District B,” Touchet said. “When businesses come in, are we requiring them to make sure they are providing the proper trash cans outside.”
Touchet said he has gone to Lauren Park, the new shopping center near Walmart.
“There is not one trash can outside of any one of those buildings,” Touchet said. “As beautiful as Lauren Park is, go on a Saturday morning and you’re going to see trash all over. It’s blowing to all ends. You go to that Dollar General (near John Hardy Drive,) that used to be in my district and there are issues with trash.
“Is there anything we can put to where people are required to make sure there are proper trash cans outside of businesses?”
City Attorney Ike Funderburk said he will look into the issue.
“We can try to find something feasible,” Funderburk said, “depending on the circumstances of the facility. We may not need to have a trash can outside of every business, but maybe outside of every third or fourth business.”
Touchet said that is certainly a workable possibility.
“We just need to have something within reason to where people can dump trash,” Touchet said.
Touchet stressed that he is not out to blame business owners.
“It’s really on people not taking responsibility for their own trash,” Touchet said.
Councilman Brady Broussard Jr. said he is in favor of more places to properly put trash.
“Trash is out of control,” Broussard said.
Again, while Touchet said he is not looking to place blame, all involved can bring forth a solution.
“I feel like businesses need to take a more active role,” Touchet said, “and I ask citizens to please not throw trash. It’s getting all over the street and affecting other businesses.
“People need to take more responsibility for their actions.”