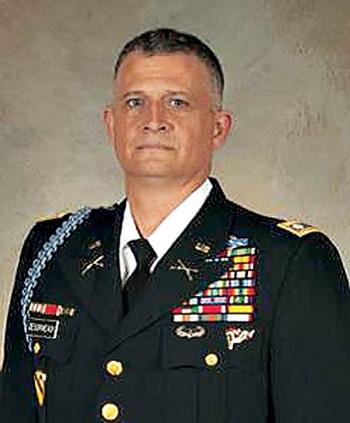 PINEVILLE, La. – Lt. Col. Scott Desormeaux will take command of the Louisiana National Guard’s 2nd Battalion, 156th Infantry Regiment, 256th Infantry Brigade Combat Team during a ceremony at Erath High School today.
Desormeaux, a resident of Abbeville, was commissioned through Army ROTC at Northeast Louisiana in Monroe in 1994. He holds a Bachelor of Arts in Occupational Therapy from Northeast Louisiana in Monroe and a Master of Science in Emergency and Disaster Management from the American Military University. He is currently an occupational therapist MedXcel full time.
Lt. Col. William Haygood will relinquish command to Desormeaux during the official ceremony.
Haygood, a resident of Gonzales, was commissioned through Officer Candidate School in 1991. He holds a Bachelor of Arts in General Studies from the University of Louisiana at Monroe. He is currently the strategic planner for the Louisiana Military Department.
Headquartered in Abbeville, the 2-156th consists of Headquarters and Headquarters Company in Abbeville with a detachment in Jeanerette, A Company (Rifle) located in Breaux Bridge with a detachment in Plaquemine, B Company (Rifle) located in New Iberia with a detachment in Franklin, C Company (Rifle) located in Houma, D Company (Weapons) located in Thibodaux, and E Company (FSC from 199th Brigade Support Battalion) located in Jeanerette with a detachment in Abbeville.
The 2-156th has been in continuous service since 1861 and served under two national flags in addition to the flag of Louisiana. The 2-156th has deployed in support of Operation Desert Shield/Storm in November 1990, Operation Iraqi Freedom III in 2004 and Operation Iraqi Freedom/Operation New Dawn in January 2011.