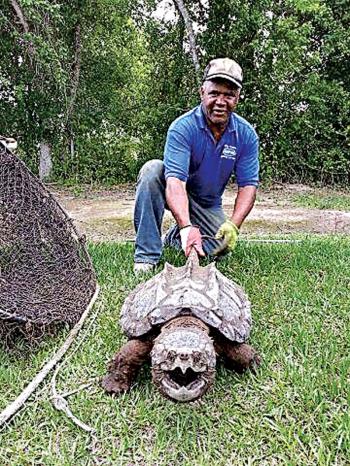 Victor Senegal holds a large alligator snapping turtle he wrestled with and then loaded into the back of his truck.

Victor J. Senegal is no stranger to catching turtles.
“I work in the cane fields, and I find turtles all of the time,” Senegal said. “I found one the other day.”
Senegal has never come across one like he did Tuesday afternoon near his brother’s property on Coulee Kinney canal. Senegal, a native of Abbeville, hauled in an alligator snapping turtle, one he guessed weighs between 40 and 50 pounds.
“That’s just picking it up,” Senegal said of his estimation. “That thing is good and heavy.”
Senegal happened upon the turtle Tuesday. He was in the process of clearing some trees and debris near Coulee Kinney when he noticed something he thought was a log.
“I wondered where the log came from,” Senegal said. “Then I saw it move.
“It was headed to the water.”
Senegal then moved in to do what he has done many times before, catch a turtle.
“I jumped on it and tussled with it,” Senegal said.
The battle lasted about 30 minutes, with Senegal coming out on top. He was able to pick the turtle up and put it in the back of his truck.
“I was good and worn out,” Senegal said with a laugh. “My back is feeling it.
“I have fought with a lot of men in my day, and I have never been whipped like I was by that turtle.”
Senegal certainly holds no disdain for his opponent. In fact, it is quite the opposite as Senegal holds a level of respect for Harry, as he has taken to calling the turtle.
“I usually eat the turtles I catch,” Senegal said. “I am not eating this one. He’s got to be well over 100 (years old).
“He has earned the right to live.”
To help make sure that happens, Senegal said a co-worker is helping him get in touch with someone at the Louisiana Department of Wildlife and Fisheries.
“My boss has a friend who works there,” Senegal said.
Where the turtle ends up remains to be seen. Senegal has his ideas.
“I think it should be a zoo,” Senegal said. “My grandkids love it.”
The turtle is secure at the moment in a cage at Senegal’s house.
“I gave it some food and water,” Senegal explained.
Again, Senegal has no desire to see the turtle become food.
“I have had a few people call me already wanting to buy it,” Senegal said. “I’m not interested in seeing it killed for that.”
The turtle may not be in Senegal’s life for long, but it will be a story he can tell for a long time.
“I have caught a lot of things,” Senegal said. “I have caught some decent sized catfish and turtles, things like that, but I have never caught anything that big.”