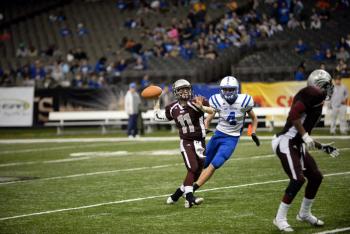 Passing at 100% in the first half, Brennan Gallet was a big factor in the Vermilion Catholic win over St. Frederick, 63-18. By the end of the game, the starting quarterback had gone 14-21 for 269 yards and four touchdowns.

His longest pass was a soaring bomb to Connor Menard in the first touchdown of the game (the second score of the game, with the Warriors drawing first blood with a 3-point kick earlier).

His ability to direct the offense, which picked up a total of 485 yards, six offensive touchdowns, 16 first downs and 63 points, was key in the massive victory.

Small wonder he was named Most Outstanding Player by the media present at the game.

"It's such an honor," Gallet said. "I couldn't have done it without the rest of the team."

The senior quarterback took little credit and gave Menard, Mike Campbell, Emile Trahan as much as he could. "Connor and Emile were open all night," he said. "They made it easy."

When describing the first half, Gallet said it was a lot like a video game. "I have never played like that," he said during the official postgame interview with reporters. "It's really a credit to everybody."

After the game, he was wearing his insulin pump. "It was just like any other day," he said when asked if his health was good leading up to it. "I never really felt dizzy. You eat a normal breakfast and lunch and just stay on top of it."

According to him, there were no issues on the sideline.

There was one other person Gallet praised in the victory - Father Theriot.

"It was a huge loss to the school," he said about the priest and longtime VC supporter. "But, it was great to know he had the best seat in the house to watch us win the title."

Gallet said he's going to keep working hard for the rest of his senior year at VC. After he graduates, he plans to attend the University of Louisiana at Lafayette.