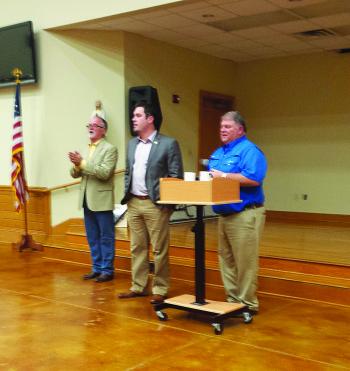 At a recent meeting of les Curieux de Vermilion state representatives Bob Hensgens and Blake Miguez, each serving portions of Vermilion Parish, gave year-end reports of the past legislative session proceedings and their personal related activities in that session.
Representative Hensgens said it had been a very contentious session with many difficult problems being addressed, most of which stemmed from the 1.6 billion dollar deficit in the state budget. Legislators were forced to make very difficult cuts in funding some of the state’s most important departments and programs . State revenues, particularly oil and gas related, continue to drop, making it impossible to have a balanced budget without making some very serious cuts in spending.
The “common core” public educational standards issue was addressed, and although it met with a general disapproval by legislators , it was not completely “ dropped “ as a potential program for the state’s public education system. Further consideration and action on this issue is expected in the next session.
A new, incoming governor will have an impact on the next legislative session and it is unclear at this time just what that impact will involve, but it can be assumed that some changes will tke place.
Representative Hensgens also reported that one of the most difficult procedural issues that a legislator faces when voting on a particular bill is that state law and legislative rules allow last minute changes in a bill and unless you are aware of such changes, you may not know what that bill will actually create.
Newly elected representative Blake Miguez, who filled the seat of resigning representative Simone Champagne, reported on the challenges of being thrust into immediate legislative action without much time to prepare. His initial success as a legislator proved that he adapted to the position quite well. Of the five bills he authored and filed, all five were passed and signed; an almost unheard of accomplishment by a “ rookie” legislator. Part of that success resulted in a 1 million dollar funding for Vermilion roads and bridges. He was quick to point out that he had received much help and guidance from his local legislators. His self assessment is that he is conservative, pro-life, pro-second amendment, and pro-small businesses.
Both representatives allowed considerable time for questions from Les Curieux members and did their best to answer these questions to their satisfaction. Some of those questions involved issues such as; the governor’s power of line item veto on bills passed by the legislators; an effort to “ rule out “ last minute changes in bills; how the next legislative session will deal with further declining revenues in balancing the budget; and where we stand in getting better hurricane protection.
After adjournment of the meeting the representatives mingled and visited with Les Curieux members and their wives, who are invited to this special meeting each year. Relaxed conversation was enjoyed by all.