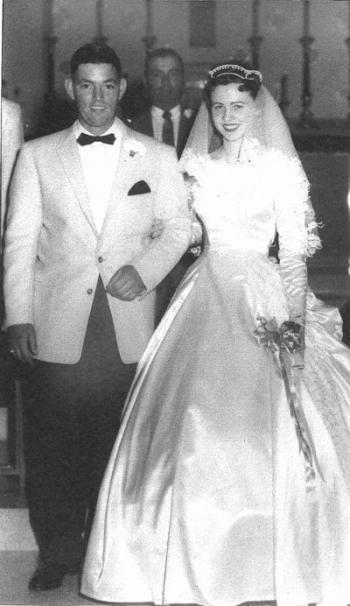 Raywood and Nolia Faulk on their wedding day. 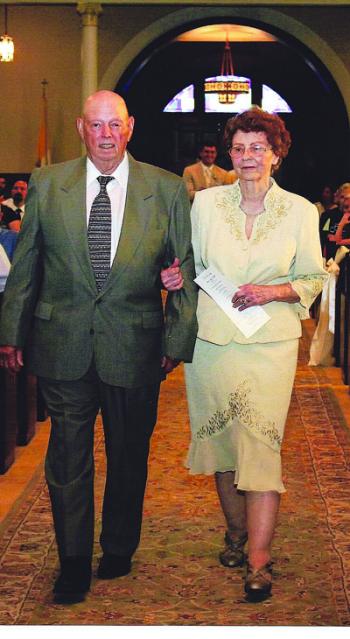 Raywood James and Nolia Touchet Faulk of Kaplan celebrated their 60th wedding anniversary on December 22, 2016.
The Faulks were married on Saturday, December 22, 1956 in the Most Holy Rosary Catholic Church in Kaplan.
The couple has four sons, Reverend Kendal James (Jackie Baudoin, deceased), Jody Ray (Beth David), Neil Terrence (Veronikha Caceras) Errol Dennis (Kathy Schexnider).
Their six grandsons include Kip Alexander (Ashley Bordelon), Shane Savi, Matthew Dennis, Jacob Ryan (Alise Legere) Dylan James and Britt Austin; and one granddaughter, Jolie Marie.
Their four great-granddaughters include Lily Grace, Addyson Marie, Cecile Margaret and Katherine Ann.
Nolia enjoyed sewing, volunteering at the nursing home in Kaplan in the beauty shop. She loved making the ladies feel beautiful with their favorite hair styles. For five years, she also worked as a teacher’s aid in the math lab at Kaplan Elementary. She gave that up to open a meat market and grocery store, located at 403 N. Lemaire in Kaplan.
Because Ray worked seven days on and seven days off, she learned to operate the large meat saw and learned how to cut the meat into steaks and other cuts of meat, She was in the store for almost 10 years.
Ray graduated in 1955 and worked with several companies throughout this career including Dupon Fabricating, Western Geophysical, Kerr-McGee Oil and Freeport MacMoran.
After Ray’s retirement at the age of 55, the Faulks enjoyed vacations in many states, mostly where ball games of their sons took place. Ray never saw a ball game he did not like.
One of their favorite places to vacation was Branson, Missouri, where they visited nine times.