Cantrelle and Babineaux joined in marriage 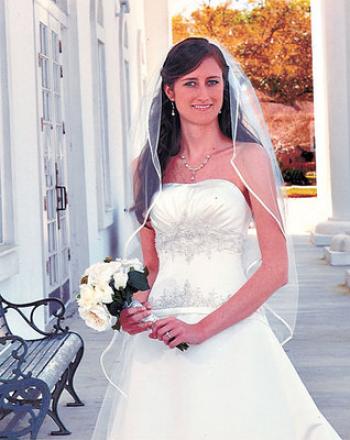 The bride wore an elegant gown made of ivory satin. The strapless neckline featured a pleated bust, while the bodice was adorned with Swavorski crystals and silver embroidery. The a-line skirt was completed with an embellished hemline. The v-back flowed into a semi-cathedral train that was finished with satin-covered buttons.

The bride’s maid of honor was the groom’s sister Demetri Babineaux. The bridesmaids were friends Sarah Blakey, Breezy Louviere and Christine Andrus and sister-in-law Melissa Cantrelle.

The junior bridesmaid was Samantha Cantrelle, niece of the bride.

The flower girl was the groom’s godchild Lily Broussard and the ring bearer was Hunter Hebert.

The junior groomsmen were cousins Andy Broussard and Luke Broussard.

Music for the ceremony was provided by singers Karen Guidry and Katie Guidry and trumpeter Will Green.

Readings were giving by the groom’s aunt Nancy Broussard and the groom’s godmother Sheila Trahan.

Following the ceremony, the reception was held at the Ramada Inn in New Iberia.